I purchased the 64GB, Wifi-only, black iPad2. I’ll explain why I chose the model with the most memory a little later in the post. Taking a quick poll from those around me in line, this was the model most of us were waiting to buy. The other thing I noticed from my line-mates was most of them were iPad1 owners. 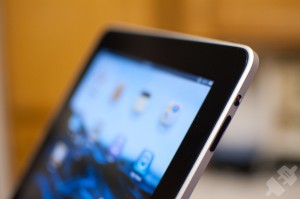 Walking out of the Best Buy, I was now the proud owner and user of three Apple products. I shared with one of my co-workers that it’s kind of like the story of Goldilocks and the Three Bears. My MacBook is Papa Bear, my iPhone is Baby Bear. And now the family is complete with my iPad – Mama Bear. I guess in this scenario I’d be playing the role of Goldilocks, although I refuse to wear the yellow-haired, pigtail wig. So now, I have the option to choose which machine is “just right” for whatever I’m doing.

The opening of my iPad was very similar to opening my iPhone or my kid’s iPod Touch. The device sits on top with the cords and booklets nicely packaged below. And of course, I now have two more Apple stickers!

The anticipation to turn it on and start playing with the device is met with the “sync with iTunes” screen. After jumping through the hoops required to add this device to my account, I was ready to go. Here are my random observations…

I’d love to hear your recommendations for apps you enjoy or ways you’ve incorporated an iPad into your workflow.