Blake Mycoskie made a discovery. While in Argentina, he noticed that a lot of kids didn’t have shoes. So he returned to the United States and started a shoe company. For every pair of shoes that someone buys here, he gives away a pair of shoes to someone who needs them. You’ve probably heard of Blake’s company – Tom’s Shoes.

While Blake’s example is widely known and fairly large in it’s impact, there are a numerous examples of students who have discovered a problem, seen a need, or grown dissatisfied with the status quo and worked toward change. Some would say the time that a young person spends in school is meant for preparation — to get ready for the “real” world. 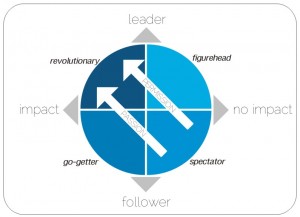 The Impact Graph (click on image to see full size)

Yet, I point students back to the Impact Graph. Life’s too short to sit on the sidelines. What you may lack in experience or skill you can make up for in energy and fresh perspectives. I encourage students to move toward the upper left quadrant on the graph — to become a revolutionary in their environment.

Some may argue that the term revolutionary is too strong a word to use. Am I really encouraging students to overthrow the establishment and create a whole new regime? To that, my answer is…maybe.

I think there are structures, apart from government and the school administration, that could use some re-working and re-imagining. There are places where the status quo has existed for too long and it’s no longer relevant. In order for these systems and structures to change (to improve or to move aside for something new) it will require leaders. But not just any type of leaders…it will require revolutionary leaders.

I believe this generation of students is poised to identify some of their own to be these revolutionary leaders. I characterize a revolutionary as one who:

Not everyone is called to be a revolutionary, but everyone can work on the skills and characteristics that are developed in a revolutionary leader. I’ve seen students who didn’t hold any type of official “position” of leadership on our campus exhibit a great deal of influence when it came to leading others in an area they were passionate about. They connected other students to a cause that was bigger than any one person could tackle. It is amazing to see what people can accomplish when they are challenged by something meaningful that is led by someone passionate about it.

If you have some students or you are a student who has the desire to move in the direction of the revolutionary, consider the following questions:

There is a big gap between the spectator and the revolutionary. For the students who desire to make a greater impact on their campus and community, I encourage them to begin to get involved. The first step is to show up and then you can begin to step up.

I’ve got one more post in this series. In my final article, I’ll look at the path to leadership and make some observations that you can use as you chart your course with the Impact Graph.