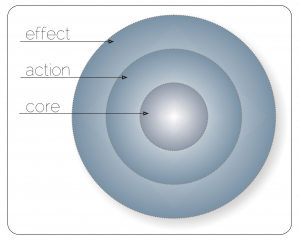 I want to come back to the leadership image I shared with you a couple of weeks ago. I firmly believe the best student leaders (or most any leader) will lead from the inside out. They will take the time to develop who they are on the inside more than the type of person they hope to portray on the outside.

One of the most important areas of a person’s core is his or her character. Character can be defined as the will to do what’s right even when it’s hard. Great definition. Often hard to do.

Based on the definition above, I think you can identify two different types of leaders. Both will do what’s right even when it’s hard. But the reasons why are different.

For example, one leader might be tempted to steal money from his business or organization for personal expenses. Nothing wrong with being tempted. But this leader decides not to steal the money because he might get caught or he might lose his job. For this leader, it’s his consideration of all of the consequences that keep him from stealing the money.

Another leader finds herself in the same situation. But rather than think through all of the consequences, she makes the decision to not steal the money based on the fact that stealing the money is wrong.

The question is: What if he could know with certainty that he wouldn’t get caught? Wouldn’t lose his job?

The second leader demonstrates inside out leadership because she has made a decision that she’s not a thief, that stealing is wrong. Her decision is based on who she is (her core). Thus, her actions and effects of those actions will play out based on who she is rather than the other way around. This is a better kind of character.

Do you see the distinction?

We’re all tempted to do “the wrong thing” from time to time. The issue isn’t being tempted, but one’s response to the temptation. The leader who leads from the inside out will do the hard work to establish core principles from which to lead rather than relying on consequential ramifications. The outside in leader will always be guessing about how things will turn out. The inside out leader will be guided by principles and values that remain consistent over time.

What do you think? Where else have you seen this happen?